The Iglesia ni Cristo (1914) developed and grew as an organization based on the seemingly believable claim of their founder, Felix Manalo, to be the prophesied GOD'S LAST MESSENGER or CHOSEN SERVANT in the prophesies of Isaiah, primarily that in the 41st chapter.

We also suggest that you open your Bible and read the parallel prophecies that we use to prove our stand that it is The Christ and NOT Felix Manalo who is the prophesied CHOSEN SERVANT OF GOD.

Note: Highlighted verses are the parallel prophecies that point to The Christ as the fulfillment. The author's commentary is provided after each verse.

Jacob whom I have chosen, The descendants of Abraham My friend.

Psalm 24:6- This is Jacob, the generation of those who seek Him

The prophesied servant of God referred as Israel is God’s Son Jesus, who was likened to the nation of Israel in such that He was also called ‘out of Egypt.’ The same prophesied entity chosen by God and referred as Jacob is also Christ (read also Ps 24:3-5).

9 You whom I have taken from the ends of the earth,

Isaiah 49:6- That You should be My salvation to the ends of the earth And called from its farthest regions, And said to you, ‘You are My servant,

I have chosen you and have not cast you away:

Isaiah 49:3- ‘You are My servant, O Israel in whom I will be glorified

Isaiah 42:1- Servant whom I uphold

The time frame ‘ends of the earth’ is the time when The Lord Jesus is God’s salvation for man, thus the Christian Era.

The prophesied chosen servant of God is The Lord Jesus, The Christ whom God upholds and in whom God will be glorified.

Zechariah 13:7- God is Christ’s companion Be not dismayed, for I am your God. I will strengthen you,

Yes, I will help you, I will uphold you with My righteous right hand.’

Isaiah 42:1- Servant whom I uphold

God will be with the prophesied chosen servant Israel or Jacob because He is the one chosen by God to be His companion, and thus God becomes His strength, being the One given the rule or authority of God (read also Isaiah 9:6 / Matthew 28:18).

11 “Behold, all those who were incensed against you Shall be ashamed and disgraced;

Isaiah 45:23-24- All shall be ashamed Who are incensed against Him They shall be as nothing, And those who strive with you shall perish.

Those who were incensed against Him (the Word of God in verse 23) will be ashamed and disgraced.

12 You shall seek them and not find them— Those who contended with you. Those who war against you Shall be as nothing, As a nonexistent thing.

Acts 2:35- Till I make Your enemies Your footstool

This is a continuation of verse 11 as it continues to talk about His enemies who shall be defeated and considered as nothing, being likened to a footstool of a victorious King.

13 For I, the Lord your God, will hold your right hand,

The Christ is the servant whom God will uphold and help.

The Lord Jesus was the prophesied Jacob who was likened to a worm in such that He will be despised and a reproach of man. How could it be that when the descriptive word ‘worm’ is connected with the name ‘Jacob’ it now refers to Felix Manalo?

15 “Behold, I will make you into a new threshing sledge with sharp teeth; You shall thresh the mountains and beat them small,

Isaiah 27:12- The Lord will thresh to gather the children of God And make the hills like chaff.

16 You shall winnow them, the wind shall carry them away, And the whirlwind shall scatter them;

Luke 3:17- Christ will winnow, clean the threshing floor and burn the chaff

You shall rejoice in the Lord, And glory in the Holy One of Israel.

Commentary on verses 15 and 16

The prophesied threshing of the mountains to make them small (into hills) while continuing to make the hills like chaff is the destruction by Christ of all the organized churches and religions established and led by man, and the work of winnowing the chaff is purposed to separate and save His elect (Matthew 24:31), the servants of God (Revelation 7:3).

17 “The poor and needy seek water, but there is none,

John 4:13-14- Christ will give living water, also read John 7:38 Their tongues fail for thirst. I, the Lord, will hear them; I, the God of Israel, will not forsake them.

The water that God will give to His people who are needing it is the Word or message of The Jesus. His Word will become a fountain of living water to those who receive it.

This verse is not claimed by the INC1914 but is included to further show how the 41st chapter of Isaiah spoke about The Christ and not about Felix Manalo of the INC1914.

The verses that we studied in the 41st chapter of Isaiah all point to The Christ Jesus being the fulfillment of these prophecies as supported by parallel Messianic prophecies. Anyone who lays claim unto these prophecies is guilty of blaspheming The Lord Jesus Christ, and God who promised to give Him as His covenant and salvation to man.

Now that we have the understanding on these prophecies, should you continue to believe in a blasphemous claim such as that of Felix Manalo and of the INC1914? Or should you accept the truth of the prophecies so that we can benefit from the promise of God and His divine purpose in sending His Son to be The Messiah or Savior for our souls?

As declared by one of the living witnesses of The Lord’s majesty, the Apostle Peter has this to say concerning the importance of heeding or believing in The Lord Jesus as the One confirmed by the prophecies:

16 For we did not follow cunningly devised fables when we made known to you the power and coming of our Lord Jesus Christ, but were eyewitnesses of His majesty…

19 And so we have the prophetic word confirmed, which you do well to heed as a light that shines in a dark place, until the day dawns and the morning star rises in your hearts...

Not knowing the confirmation of the prophecies shows that we are not heeding the light, The Lord Jesus being the light unto the world. In contrast, how are those who continue to believe in the false claims of Felix Manalo and other false prophets describe by the Apostle Peter? They are those who follow CUNNINGLY DEVISED FABLES!

Now you may ask, why bother to preach that The Christ Jesus is the fulfillment of the prophecy? Because there is a grave danger when one rejects The Lord to be Him who is prophesied and instead replace Him with someone else:

12 They have lied about the Lord, And said, “It is not He. Neither will evil come upon us, Nor shall we see sword or famine. 13 And the prophets become wind, For the word is not in them. Thus shall it be done to them.”

“Because you speak this word, Behold, I will make My words in your mouth fire, And this people wood, And it shall devour them. 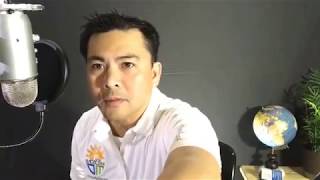